The naming of Quinney’s Wood in memory of  the Woodcutters’ founder, Fred Quinney

Scroll down to see photographs taken on the day

At noon on Saturday, 27th April 2013, volunteers and friends of the Clevedon Woodcutters for Wildlife, along with members of the Quinney family, gathered in a sunlit patch of woodland beside Davis Lane. 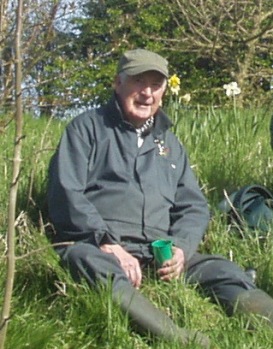 The occasion was to celebrate the naming of the wood in memory of the Woodcutters’ late founder and long-time chairman, Fred Quinney, who was also a member and former treasurer of Clevedon Civic Society as well as volunteer Tree Warden for Clevedon Town Council until 2009.

The one hectare wood, originally known informally as the Blind Yeo Wood, was planted by Fred and his Woodcutters in 2002 on pastureland owned by the Environment Agency. Thanks to the continuing care of the Woodcutters it is now well established with over 20 species of native trees.

The naming ceremony was attended by 29 people including representatives from the Environment Agency, Clevedon Town Council and Clevedon Civic Society. Representing the Quinney family, son Nigel, visiting from the United States, spoke of Fred’s dedication to woodland conservation and warmly thanked the Woodcutters for naming the wood in his father’s honour. A signboard specially hand crafted by members of the Woodcutters was then unveiled by Fred’s widow, Joan.

Visitors are welcome to enjoy this secluded woodland retreat, which is located in Davis Lane a few hundred yards from the turn off from the B3133 to Yatton.  Quinney’s Wood is accessible over a stile opposite a small lay-by.

Wild cherry blossoming on the day of the dedication

Nigel speaks with warmth of his father and the Woodcutters

Nigel tells the crowd that his father said that the coffee breaks with the Woodcutters were the best part!

Enjoying the bright but chilly day

The line up – 29 people in all attended the ceremony . Thanks everyone for coming!